Laughter is the best medicine

Three 12th standard students, Shreya, Netra and Haseena were coming to me for Sanskrit tuitions. I loved teaching them because they used to make the class very lively with all their jokes and giggles. Before they even rang the bell of my house, I would know that they are coming because I would hear their laughter from far. Looking at them I realized how without my knowledge I had lost this quality of giggling and laughing at silly things. Adulthood with its responsibilities and challenges had made me serious. Thank God these girls came to me and rekindled the spark of giggling.

After realizing this I also joined these girls in their jokes and laughter. It was extremely refreshing and rejuvenating. Here I share some of their jokes that I remember now. They may sound silly for some adults, but we used to laugh at these jokes anyways.

Haseena would ask many questions like “why does ‘Na’ come in some places like ‘rameNa’ but in some places ‘na’ sound comes like in ‘phalena’. Before I could answer her question, Netra would say “Hey! That is all Panini (the great Sanskrit grammarian) ma. We won’t understand all that”. And they would laugh. After having that realization, I too would laugh with them.

One day I was teaching them ‘Jashtva sandhi’ and for an example I took this word ‘vaageeshaH’, which when we split becomes ‘vaak + eeshaH’. They asked me the meaning of ‘Vaak’ and I told that it mean Speech. They knew that ‘Eesha’ means Lord. So, they asked “does ‘Vaageesha’ mean lord of speech?” I said “yes”. The moment I gave my confirmation the girls started laughing. I was curious to know the reason behind that laughter and so I asked them the reason. One of them said “Mam we have a junior in school and his name is Vaageesh and he talks a lot. No wonder his name is Vaageesh”. 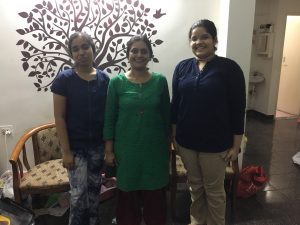 Since Shreya was very much interested in speaking Sanskrit, I would invite her to my online classes when we did only spoken activities. And my goodness, the energy of the class would be totally different. It would be extremely lively and filled with laughter. Even now some of my online students remember Shreya and when they remember her, they have a broad smile on their face.

Though they were giggling and laughing they were also very sincere students. They would practice what was taught and ask me to give homeworks and tests. I had a great time teaching them and I wish them all the very best for their future.

I am just thinking that I should find ways to spend time with teenagers. They are so full of energy and since they don’t have too many responsibilities their minds are free. Spending time with them will help me in keeping in touch with my younger self.